Today was our last day in Paris. It was a beautiful summer’s day around 25 degrees and blue skies. We decided to spend the day just walking around and soaking up sights. In the end we wandered along the Champs Elysees up to the Arc de Triomphe and some of the surrounding area had lunch at Flo before  strolling back to the Hotel to prepare for our departure tomorrow and then getting ready to have dinner at the Eifel Tower.

There is a restaurant in on the first level of the tower with fantastic views of Paris. We had pre-booked the restaurant prior to leaving Australia so that it was available when we were here. It was a very nice 3 course meal and an amazing environment. After dinner we were able to take a 360 degree walk around this level and take some photographs (some of which I hope are OK – will check shortly.

I will leave you with some photos of the day  and then an earlier night as we board a train in the morning as we head to Interaken. 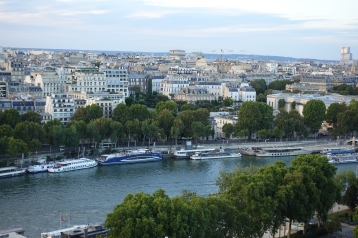 From the top – Norm waiting patiently by a fountain while I run around taking photos’ Norm at the Arc; Fouquet’s where we had lunch; me outside Gucci (not sure why Norm wanted this shot – I didn’t even go inside!) and finally photos taken from the Eifel Tower.