As I mentioned yesterday we planned to do a 3 hour walking tour today; and we did.

We started at the Colosseum so that meant getting up early to have breakfast before setting off to get to the Colosseum and find where we were meant to meet the tour guide.

We were not sure how long it would take to walk there but had allowed an hour so we started off at 8:00am. In fact we over-estinated the time required as it only took us 30 minutes to get there – so we were there in plenty of time and easily found the meeting point.

I took some photos while we waited (there’s a surprise) and Norm had a cappucino (another surprise).

Around 9:00am we were all present and accounted for and off we went to see the Colosseum. Very interesting – in its day it could hold around 50,000 people (much like Ethiad Stadium) and it had a moveable roof made from a sailcloth type fabric. To move the roof, apparently 100 sailors were required to move it. It did not completely cover the Colosseum (there  was  an opening in the centre of the roof) but it was designed to shade the spectators (again much like Ethiad) – the sports held in both stadiums might be slightly different but interesting how the concept hasn’t changed a lot (especially considering the Colosseum was completed around 80 AD.

After exploring the Colosseum we then went on to visit the Forum and all of the sites in this area – again another facinating insight into the times.

From the Forum we saw the Capitoline Hill and some of the structures in this area including the National Monument to Victor Emmanuel II (which is referred to by Italians as the wedding cake building).

We then visited Trevi Fountain (we had already been here) and then on to the Pantheon and finally the Piazza Navona. All up it took 4 hours to complete this walk which was very interesting.

As the weather was warming up we had lunch and then booked a restaurant for dinner and returned to the hotel for a while and then ventured back out to visit a few more sites via the hop on/hop off bus – the Spanish steps  and the Trinità dei Monti church and the Basilica di Santa Maria Maggiore.

That took all day so we then went to the restaurant we had booked for dinner and then strolled back to the hotel through the night markets.

I don’t think I have mentioned we are staying opposite the Italian Parliament Building. This building is guarded 24 hours a day. Tonight on our return the piazza that we usually walk across was blocked off. So we climbed through the fence (as you do) and walked across the piazza and almost got to the corner and were challenged by the police. Norm didn’t hear them call out and kept walking – I thought it was prudent to go back and speak to them. After explaining that we were staying in the hotel around the corner they were fine. That was a bit of excitement to finish the day!

Well tomorrow is our last day before flying home. I will report in tomorrow and post my final “report” when we are home. 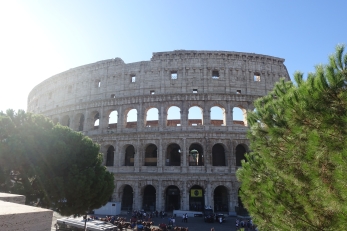 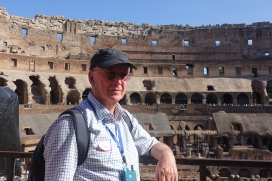 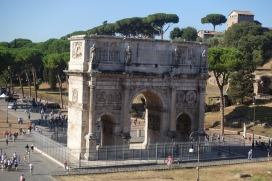 Triumphal Arch in the Forum 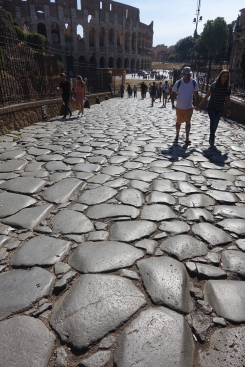 Inside the Basilica of St Mary Maggiore